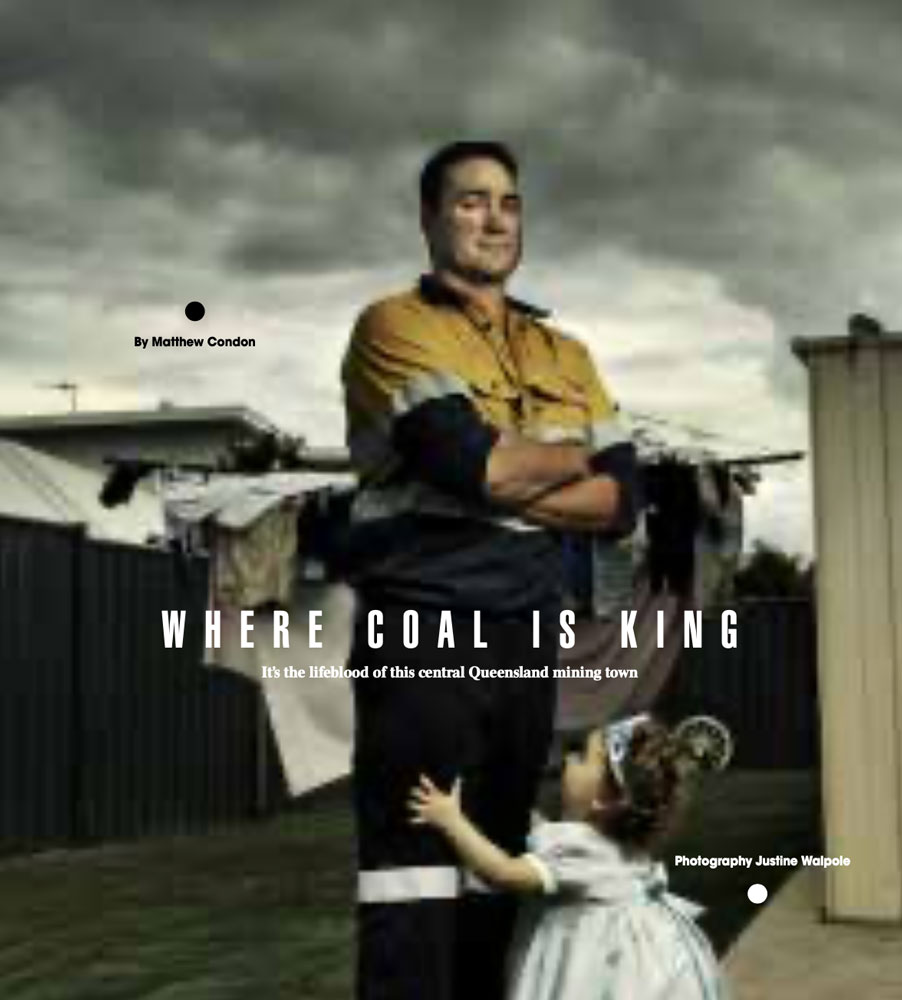 Author and journalist Matthew Condon turns his attention from true crime in the big city to one of our biggest industries in one of our smallest towns.

To meet the young Dowie family – Marie and Brett, and their children Audrey, Scarlett and baby Joe – you first have to fly to the coastal town of Mackay, 960km north of Brisbane. Mackay was once famous as a sugar capital, but times have changed. A third of the people waiting for their luggage at the local airport are aglow in lime or orange hi-vis vests when we visit in the weeks before coronavirus halted most domestic travel. Advertisements around the arrivals hall may as well be in another language, spruiking heavy equipment, trucks and tools. Sugar may
still be important but Mackay is the gateway to the Bowen Basin, and the Bowen Basin is 60,000 square kilometres of coal reserves – the largest in
the nation – extracted day and night by an army of miners. Brett Dowie is one of those miners.

Once you leave the airport you have to drive about 220km southwest to the mining town of Moranbah, via the Peak Downs Highway, a notorious two-lane stretch of bitumen populated with road trains, oversized trucks and prime movers hauling giant mining buckets. Once in Moranbah you take a right into Mills Avenue, the spine that runs through town. This place was built by a US mining giant, the Utah Development Corporation, exactly 50 years ago, and in the early days was described by a visiting journalist as being like “a new outer city suburb that has suddenly been dropped into the Queensland bush”.

The Dowies live in a relatively recently developed part of Moranbah, in Finch Street, adjacent to Bushlark Drive, not far from Sparrow Lane and
Raven Crescent. Their brick house is neat. The front lawn is freshly mowed. This could be any house in Ryde in Sydney, or The Gap in Brisbane, or Watsonia North in Melbourne. But this is a mining house in a mining town surrounded by 34 mines, with more to come. (The Carabella mine near the town of Bluff, Walton coal mine west of Rockhampton, and Olive Downs mine, 40km south-east of Moranbah, to name a few.) Here, at dusk, with children crying to be fed or wailing for Bluey on the TV, mining pervades
life. Underpins it. Sustains it.