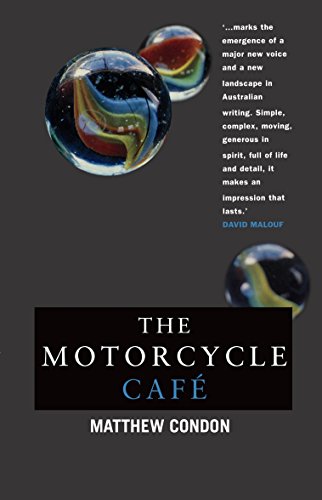 The Motorcycle Cafe is a mosaic portrait of a fascinating man going through the motions of an ordinary life.

There was no funeral for my son. I remember it was just a small service in the chapel at the back of the hospital. The chapel wasn’t even as big as the waiting room for the fathers and relatives. It had a wooden cross on the wall and chairs facing the cross. They had to telephone for a priest. It didn’t take long for him to arrive and then it was just me and the matron and the priest. A couple of my best mates waited outside because they were still in their overalls. They took their hats off though because they had them in their hands when I came out.

The people at the hospital didn’t let me see Frieda for what seemed like a long time. The whole thing was not real for me because I expected the child for so long and then there was nothing to hold or see in the cribs with the other babies. Everyone said to have some time off work but I didn’t want to. I think of my son and how he would have been a man now. He could’ve ridden with me or raced with my mate’s sons. I only have a piece of paper typed on an old machine because some of the letters are crooked. It has his name on it. They asked me what we were going to call him and they put his name on the paper. I can take it out and read it any time I want. Jim Baker – stillborn.

George Baker had fled the England of his birth to begin a new life in Australia, but he could not abandon his memories and emotions. Years after his death, many of his character traits reappear in his grandson, who must learn to live with a legacy that is both rewarding and disturbing.