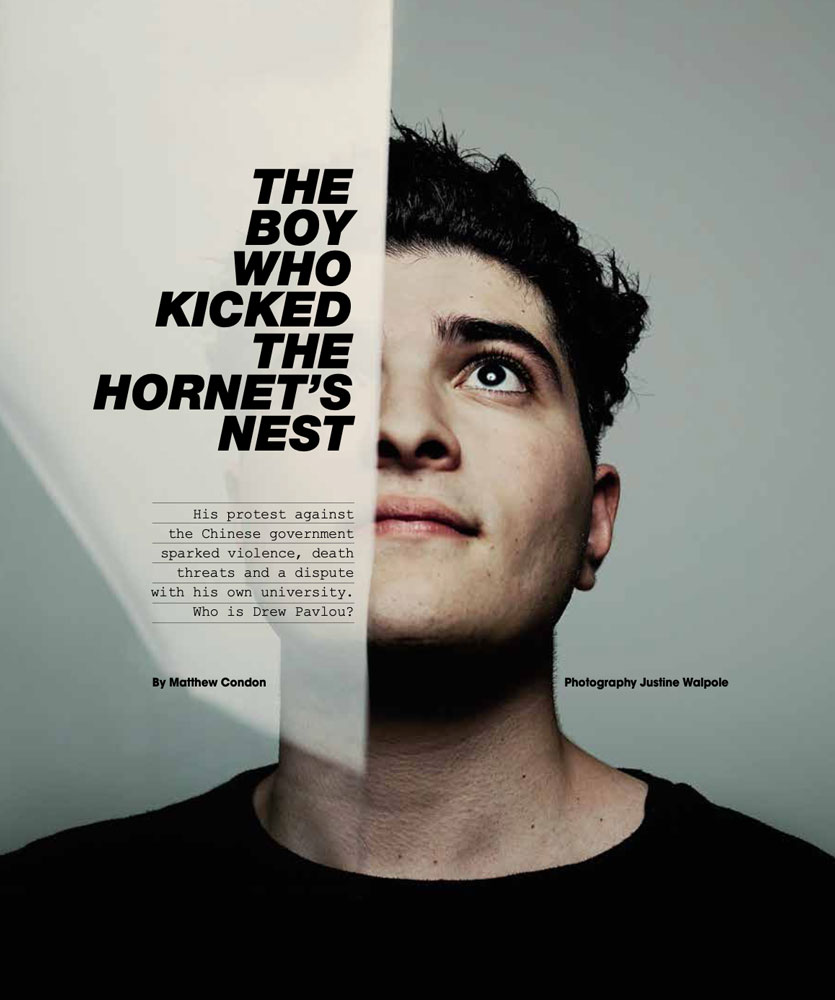 The thing you learn very quickly about Drew Pavlou is that he is a certified, card-carrying member of Generation Z. He and the fellow travellers of his epoch (born post-1996 or thereabouts) have iPhones and iPads grafted to their hands. They communicate via social media, and the more platforms the better. Nothing happens and nothing is real unless it is delivered in text form. Or in a video. Or via a meme (Oxford Dictionary: an image, video, piece of text, etc, typically humorous in nature, that is copied and spread rapidly by internet users, often with slight variations.) Negotiations
with real human beings, in the actual physical world, therefore, can sometimes be disorienting.

So it is that on the day we’re supposed to meet at his family home in Coorparoo, Brisbane, Pavlou, 20, has misread a Facebook Messenger
text about the where and when of our assignation. We were going to talk here and then head over to the University of Queensland, where he is studying philosophy and political science and where, last July, with a few sheets of cardboard, a borrowed megaphone and a few friends, he sparked an international incident between Australia and China that saw him pop up everywhere from The Washington Post to BBC World News to The Global Times, the Chinese Communist Party news outlet. In a flash he was able to send ripples across the planet and begin a debate about Chinese financial and political influence on Australian university campuses, and the very
nature of freedom of speech – and yet he can’t quite manage the logistics of a local catch-up.

Pavlou: Would it be OK to push back 15, mate? Sorry there’s been a stuff up a family member took my car. Sure, I can shoot you over to UQ after
our interview if it suits. Pavlou: Ohhh right, we are meeting in Coorparoo just remembered! Am outside. Pavlou: Sorry mate, just a minute
have to brush my teeth and what not. So sorry man I’m so disorganized.
He appears at the end of the driveway and offers a wave. He is shoeless, thick black hair gelled up, with the rosy cheeks and bearing of a boy still in high school. Over the next few hours he will often talk about once upon a time when he was “young”. And, always, the iPad is either in his hands or within reach on the couch or the coffee table. At any given moment it is receiving messages, likes, comments, threats, retweets, notes, memes and pings, the unending static that is the soundtrack of Gen Z communication.